Mathis Perron is a French artist whose hybrid environments are organised in the chaos of the spaces he invests in: he works with drawing, video, sound, and sculpture that take different narrative forms. The imagination that drives him is infused by the agricultural environment of Charente-Maritime, where he grew up and where his garden studio is now located. His work explores this territory and tells its parallel stories. He brings out its ghosts, its fantasies and shows the invisible strings that bind the protagonists of this immense theatre. Since 2015, his pseudonym Simple Pied has been cultivating, picking, drying, infusing and bagging mixtures of aromatic and medicinal plants. By displacing the gestures of herbalism into his artistic activity, Perron seeks to think outside the box to invent new artistic models. This project, such as the presented work “URPFLANZE-NIRNROOT”, directly pursues the ghost that Johann Wolgang von Goethe, poet, botanist and author of “The Metamorphosis of Plants”, tracked throughout his life. The so-called “Urplanze”; an expression that can be translated as the original plant, the plant matrix, or the primitive mould, one that would exist among all plants. In 1786, he suddenly left Germany for Italy, convinced that he would find the secret of this primordial plant in the exotic botanical garden of Naples. “In the presence of so many new and renewed figures, my old chimaera was awakened. Will I not be able, in this multitude, to discover the primitive plant?” The adventure was futile. It was necessary that in 2021, in Pantin, a strange sound pushed the new occupants of 9 rue Méhul to raise the iron curtain of an old garage. Any Skyrim explorer who has ever walked in a wetland would have recognised the throbbing sound of the Nirnroot, the bioluminescent and bioacoustic plant used by alchemists to elaborate a potion of invisibility. Goethe would have done better to look at his feet, for it seems that the “Root of the World” is nothing more than an ordinary dandelion. Of a disconcerting simplicity, the “Urplanze” that here forms since always the infinite variations of its serrated leaves.
Excerpt from J.W. von Goethe’s Journey to Italy, found in Olivier Cheval’s experimental film, Die Urpflanze. 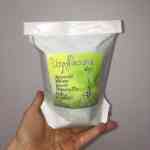 Please note: Our upcoming programming will be announced soon.

The Community’s Chairman of the Advisory Board is Ian Charles Stewart.