Will Sheldon is an American artist living and working in New York. His artistic practice moves between tattooing and painting, which are both defined by his fantastical imagery, featuring all kinds of otherworldly creatures and motives such as gothic fairies, dragons, and mythic sceneries, often influenced by pop culture, horror or fantasy movies. While playful, bright colours typically mark his tattoos, his paintings are characterised by a much darker palette of blacks, greens and purples, showing landscape settings that are surrounded by a spooky, mysterious atmosphere and aura. Combining hand-painting with airbrushing techniques, Sheldon creates the effect of deep space, a landscape that seems to fade away, crossing the painting’s spatial and temporal boundaries. The three paintings on display in “Mystic May” present familiar architectural sceneries, including castles, that are directly associated with historical periods like the Middle Age and artistic epochs, such as the silent ruins of European romanticism, but are subtly fictionalized, allowing viewers to imagine Sheldon’s fantasy characters. No human beings are seen, only a few animals that populate the landscapes, radiating a special, ghostly silence. 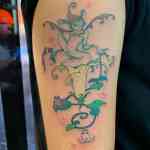