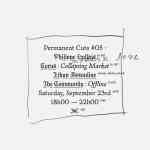 Philippe Hallais (Modern Love)
Philippe Hallais - aka Low Jack - is a French electronic composer, also running Editions Gravats label. He has released on Modern Love earlier this year his first debut album under his own name, called An American Hero. This deeply seductive LP is an opaque mixture of dream pop and ambient shimmers, setting aside the squashed dancefloor productions of his Low Jack alias for an album of emotive, indefinable ambient pieces. With An American Hero, Philippe takes inspiration from the TV biopics of high-performance athletes for an album of exceptional emotive impact; somewhere between pastiche, tragedy, and electronic futurism. Fascinated by the sports documentaries mass-produced by the US TV channel ESPN, Hallais transcribed and amplified its dramatic recipes. Accompanied by a string of short videos directed by visual artist Ethan Assouline, the album beautifully opens new pathways and ports of entry into Hallais’ multidimensional body of work, which we were obviously eager to know more about. For this fifth edition of Permanent Cuts, Philippe will play an experimental DJ set.

Cyrus (Collapsing Market)
Cyrus Goberville is co-curating the multidisciplinary Permanent Cuts sessions that were launched at The Community in November 2016. For the previous editions, he has invited Bill Kouligas, Carla dal Forno, Pan Daijing and Ron Morelli. He co-runs the Paris-based Collapsing Market label with Louis Vial. The French imprint recently unveiled the work of the Iranian composer Morteza Hannaneh with the highly immersive Tchashm-e-Del LP. Interested in contemporary scenes of both art and music, this collaborative project at The Community is a relevant way for Cyrus to gather the values of Collapsing Market.

Ethan Assouline is an emerging French visual artist. He created the installation for the inaugural edition of Permanent Cuts and has designed the artwork for Philippe Hallais’ An American Hero. Ethan will create a visual installation at The Community for the night.