The Community is pleased to present HC Sticker Threat II, an exhibition featuring the remarkable and singular Hardcore Punk sticker collection of Thomas Rackow, who has been involved in the subculture for over thirty years. The three-day exhibition is co-curated by Lorenzo Senni and Daniel Sansavini in collaboration with Henning Lührig.

First presented in Milan in 2021, HC Sticker Threat II is its first presentation in France and the first time Thomas Rackow will show his extensive collection in its entirety. The exhibition at The Community Centre will feature two thousand stickers devoted to Hardcore Punk dating from 1988 to today. The exhibition is an entryway to this subculture, highlighting its considered and thoughtful design direction and uncompromising values. For Thomas, the collection is a testament to a time and the topics of a subculture he holds dear.

Punctuated by speed and intensity, Hardcore Punk (also known as simply Hardcore) arose in the late 1970s and early 1980s as a subset of Punk Rock. Hardcore was a radical elaboration of Punk Rock, its philosophy, and DIY ethics, yet a rebuttal of the genre’s rising ego. Hardcore was characteristically primal, aggressive, and immediate in delivery. Lyrics frequently expressed anti-establishment, anti-militarist, anti-authoritarian, anti-violence, pro-environmentalist sentiments and other left-wing, anarchist, or egalitarian political views. As the music evolved and the subculture branched out, new movements within the Hardcore spectrum became messengers of alternative ideas to the everyday lifestyle. The clean and positive subculture Straight Edge and its associated sub-movements, Hardline and Youth Crew, built a constructive counter-revolution to the destructive and excessive Punk Rock subculture by abstaining from alcohol and drugs and embracing vegetarianism or veganism. Taking its name from the 1981 song “Straight Edge” by the Hardcore band Minor Threat, Straight Edge has become one of the most durable yet chronically misunderstood music subcultures today.

Underground scenes and regionalised vibrations sprouted across the United States, notably arising in cultural metropolises like Los Angeles, New York, San Francisco, Washington D.C., Detroit, and, eventually, worldwide. Living in Germany, Thomas first discovered the subculture in the early 1990s. Through the heavy sounds of bands such as Youth of Today, a Connecticut-based band that played a significant role in establishing the Youth Crew subculture of Hardcore, which he admits he didn’t fully understand on the first listen. Though Thomas was already musically engaged in Indie Rock, Grunge, Industrial, and Punk Rock, Hardcore was concealed from mainstream society and required an entry through someone within the scene. For Rackow, Hardcore shows were filled with rage and anger but also a feeling of unity and positive power, opening up the idea that together they could change the world into a better place. Like other subcultures such as Hip-Hop, skateboarding, and graffiti, stickers were vital in transporting Hardcore’s important messages, giving a glimpse into the scene’s topics and exchanges. However, Thomas wishes there were much more of these. An example of this in the collection is a sticker which reads “Cats and Dogs Have All the Luck”, a statement about going vegetarian by the New York-based Youth Crew band Gorilla Biscuits.

As exhibited, stickers are as simple as they are brilliant. Inexpensive and straightforward to produce, all it would take was a thoughtful approach to design to capture and resonate with a whole generation. Even today, Black Flag is considered one of the most impactful bands in Hardcore, if not music as a whole, because of their specific design direction to accompany their impulsive music. The four black bars that straddle alongside the Black Flag logo would give rise to an aesthetic that would dominate the scene.

Pre-internet, Thomas amassed his collection from gigs, store-bought records, and mailing lists where fans could post a few dollars to the label’s address in an envelope and receive stickers in return. Today, he uses various channels for digging for stickers, primarily Instagram, Facebook, and eBay, alongside word of mouth with people in the scene. For Thomas, the only drawback with this medium is that many artefacts are, for obvious reasons, irretrievably destroyed, which sadly means that the efforts, creativity, and passion of someone who created this little piece of art are gone forever. However, Thomas’s thoughtful and dedicated approach to collecting, informed by his love for the music, has meant that he has significantly contributed to the subculture by building the finest archive for Hardcore stickers and capturing the force of this genre anew.

With thanks to Supreme New York. 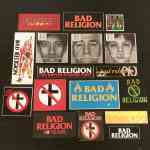 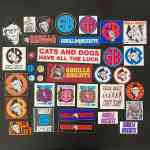 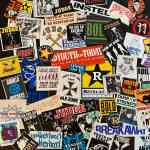 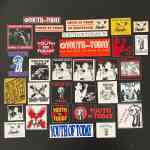 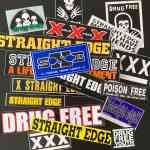 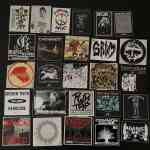